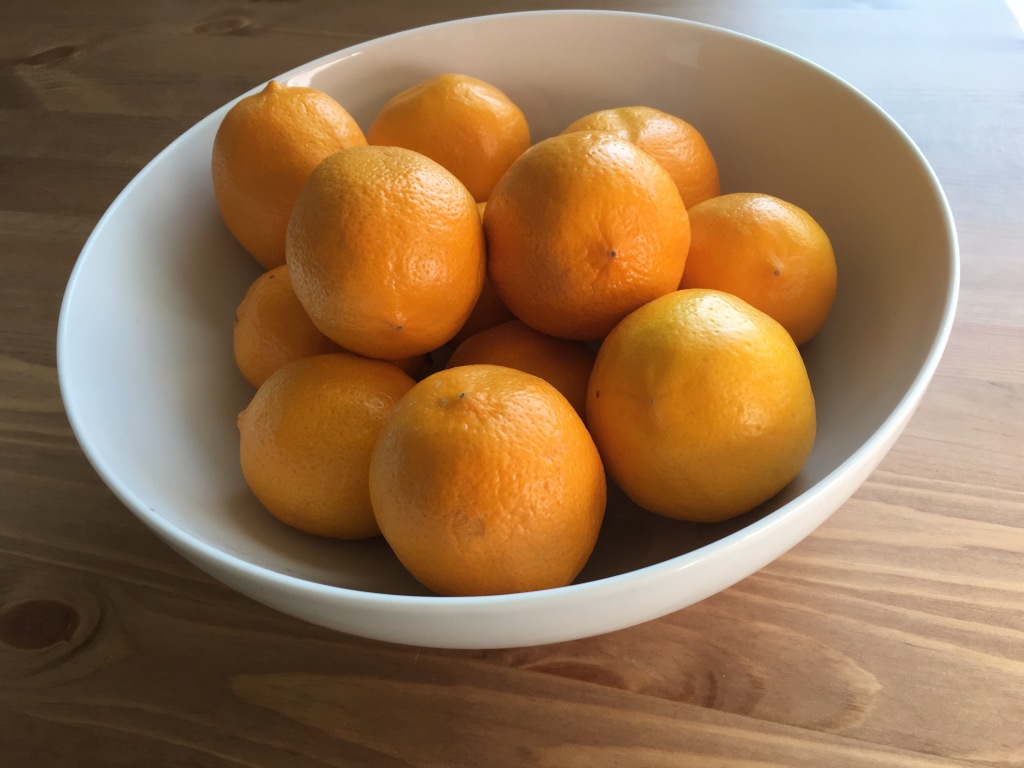 Currently I am job hunting. A month ago I was working in a fantastic spanish wine bar. I loved it because it was small and intimate. The food was from a region I wasn’t familiar with until I began the job and I loved everything about the flavors and food culture of the region we represented. And the wines. Grapes I wasn’t familiar with either but all so delicious and exciting and perfect for food. The restaurant closed suddenly just after Christmas. It’s like a break up with your partner when you still love them so much. I hate having idle hands. The job market is not in a good position right now. Restaurants are already trying to down size their teams after the holiday bulk up. Some restaurants in this city shuttered at the same time. Also this city seems so over saturated with the people who have been moving here left and right. Not having a job isn’t as exciting as one might think. I miss the smells and sounds. I miss the guests.

Alright, so I have a bowl full of lemons. Meyer lemons! Meyer lemons are particularly fantastic because they are a cross between a lemon and a mandarin orange. Just a smidge sweeter that a typical lemon. Their skin is somewhat thin and can almost be peeled like a mandarin orange. When in season some meyer lemons can be eaten just as you would most other citrus without the pucker.

January is citrus month. Citrus is all out in it’s full rainbow glory. Citrus is bright in color – bright in flavor – and superb for your health. In addition to Meyer lemons I love grapefruit and blood oranges.

Have you ever simply cut a grapefruit in half, sprinkle a little sugar on it, and put it under the broiler for a minute (or torch it)? It’s bliss. Check it out online – Brûlée Grapefruit.

I felt inspired by my bowl of lemons to try out a new marmalade recipe. Marmalade is typically a type of jam that includes fruit peel. During the boiling process the peel is softened to an almost candied like texture. 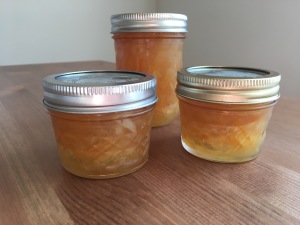 Cut lemons in half from top to bottom and then again. Slice lemons into very thin triangles. Remove the seeds and keep. Place the seeds in a small square of cheesecloth. Place lemon pieces and cheesecloth of seeds into a large bowl and add 2 cups of water. Let this sit at room temperature covered over night. The next day place contents of the bowl and 1/2 a vanilla bean split into a medium sized saucepan, bring to a boil and then reduce to a simmer for 15 minutes. Pull out cheesecloth and vanilla pod. Add in 2 cups of sugar, bring to a boil again and simmer for 45 minutes or until mixture has reduced by half. A test to see if your jam or marmalade is ready is to freeze a small plate for 20 minutes and drop a teaspoon of your marmalade onto the plate and look to see if it gels with in the minute. I typically make small batches of jam or marmalade that I can use within 2 weeks so I don’t go through the whole canning process.

I pick a canning jar size that will allow me to fill it pretty full. Make sure the jar is very clean and use a new lid. Place the hot marmalade in the jar, place the lid on top and tighten the band and then place the jar upside down on the counter for about 20 minutes. The heat from the jam mixture will seal the jar well enough if you plan to use within 2 weeks. Once it is sealed and cooled most of the way you can pop it in your fridge. This recipe produced about 1 full pint. 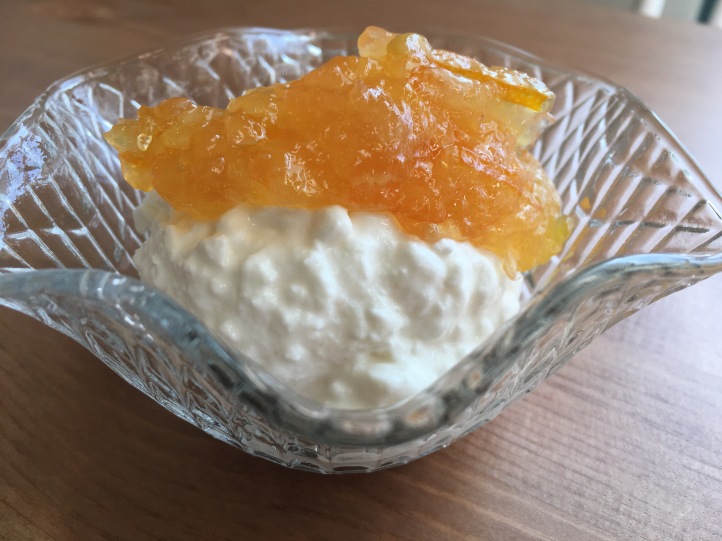 I have just one caveat with citrus. I am not the biggest fan of the pith. The stringy white “netting” that covers the segments. If I am going to get down on some citrus I tend to segment or ‘supreme’ my fruit which gets the ‘meat’ out and leaves behind the bitter chewy pith. This is an easy enough task and doesn’t have to be perfect. I usually slice off the ends and then using a paring knife carefully slice off the rind as close to the flesh as you can without loosing too much. Once you have all the rind discarded, get your knife down the side of the segment skin and make a small cut into the flesh, do this on the other side of that segment and it will fall away from the core and then repeat. This does release a lot of juice so try to do it over a bowl. The collected juice is great to drink or use it in a vinaigrette.

cut the ends off

cut in between the sections to remove the segment

Beet and Grapefruit Arugula Salad
I placed 2 large beets, roasted peeled and diced in a bowl with segments from 1 large grapefruit and 2 medium sized blood oranges segmented including their juices. In a small jar I added 2 tablespoons of orange aperitif vinegar (sherry vinegar or apple cider vinegar would be delicious too!) with 2-3 tablespoons of extra virgin olive oil (I used a blood orange olive oil), 1 teaspoon of salt, and 1/2 teaspoon of coarsely cracked black pepper – shake shake shake. To assemble my salad I placed the prepared salad dressing in the bottom of a large bowl. Topped that with arugula and mixed it all together. Using a regular spoon so as to pick up some of the citrus juices as well, I placed the beets and citrus over the top of the dressed arugula and dot the top with some semi soft goat cheese. Et Voila. 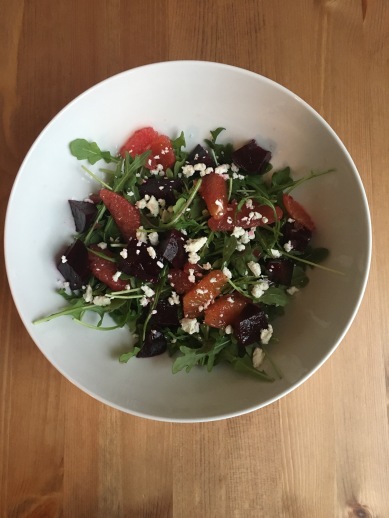 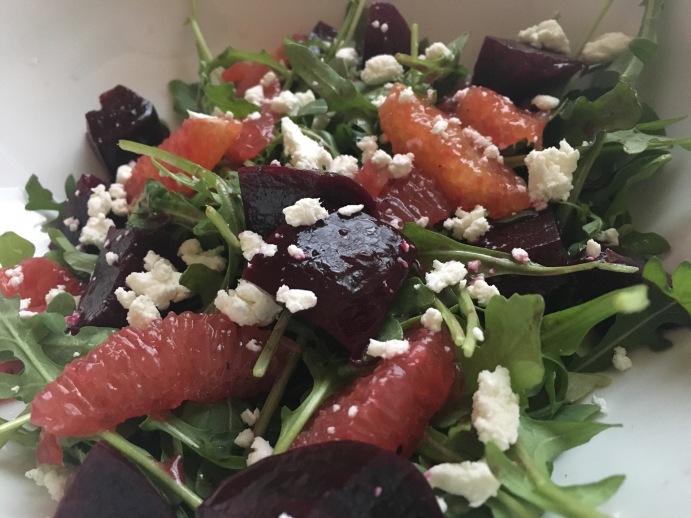